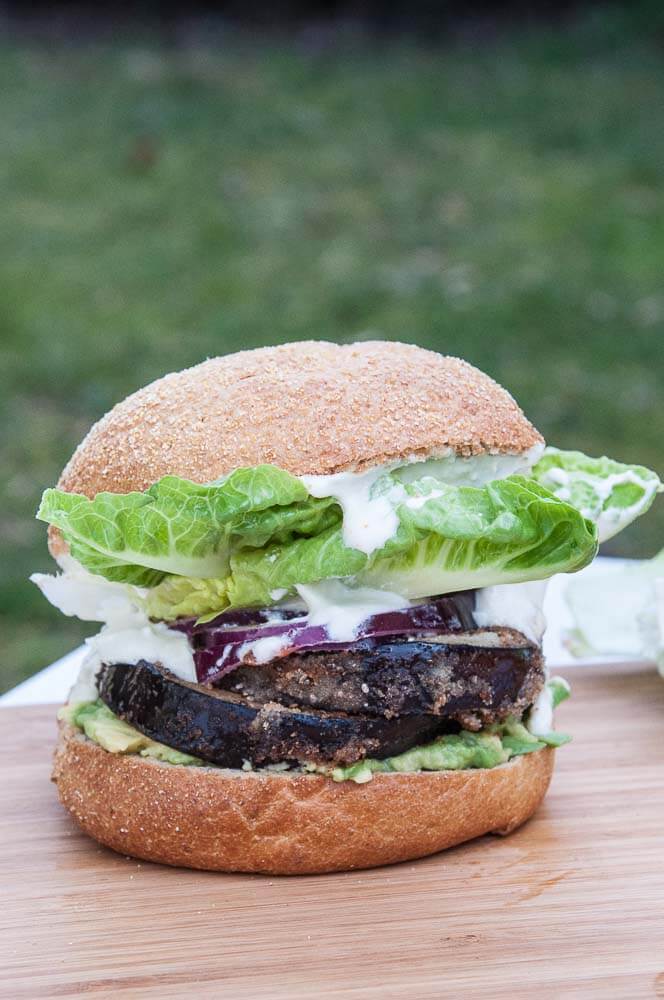 Eggplant is one of those ingredients that I tended to always steer away from. It just seemed like zucchini’s weird cousin, that nobody wants to touch. After making this stuffed eggplant from Dishing Up The Dirt and loving it. I realized how wrong I was.

What better way to ease into eating more eggplant than with eggplant burgers? I’ve seen quite a lot of eggplant burger recipes around but they all seemed to overly complicated for me. I didn’t want to bother have to cook the eggplant first then mixing it together with a bunch of other ingredients, just to cook it all again.

Of course, you could just add a few eggplant slices to the grill and use those in a burger but what’s the fun in that?

I love, love, love chia seeds and since they are great at binding, I figured it would work great to use them to coat the eggplant with. The result was surprisingly delicious :) It gives the eggplant burgers a nice crunchy texture.

First things first though. You need to pick out a beautiful eggplant to work with. 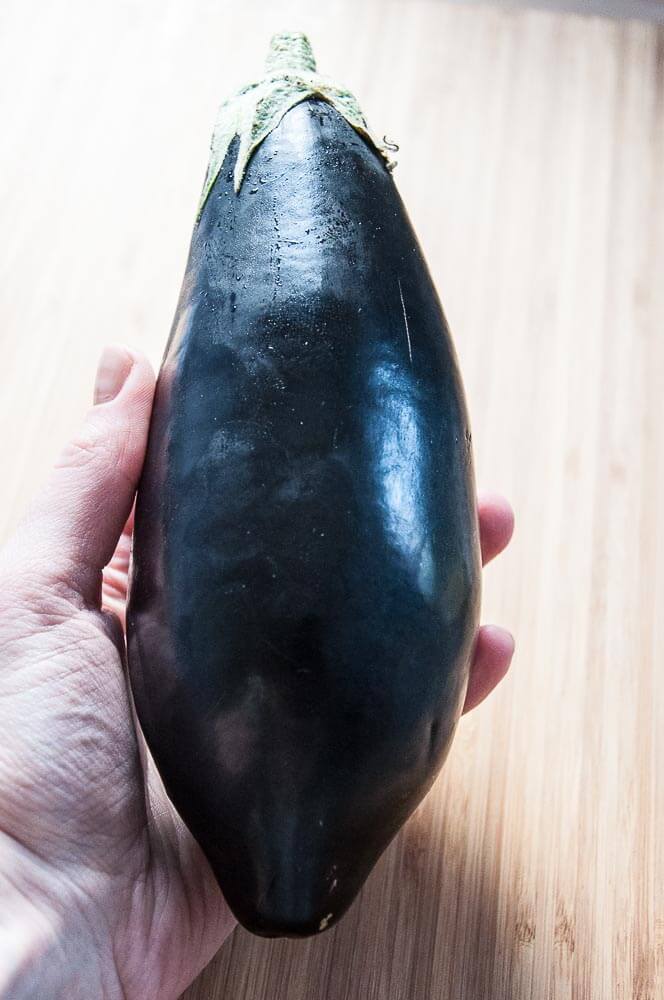 How do you choose the perfect eggplant?

People often think of eggplant as being very bitter but most of that bitterness comes from eggplants that are past their prime. Look over the list above before you by eggplant to insure you’ll pick out a good one :) Most of the bitterness has been bred out of eggplants nowadays though.

So now that you’ve got your shiny, purple eggplant in your hand, you can start slicing. 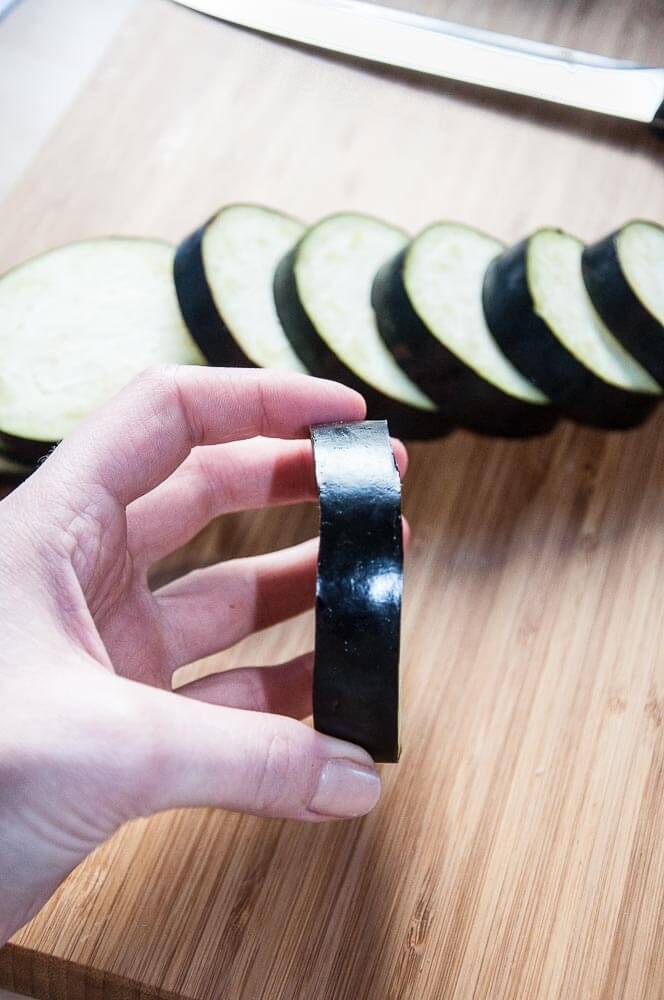 I like to take the extra moisture and any bitterness (you never know!) by rubbing both sides of each eggplant slice with some salt and letting it rest on some paper towels for a few minutes. 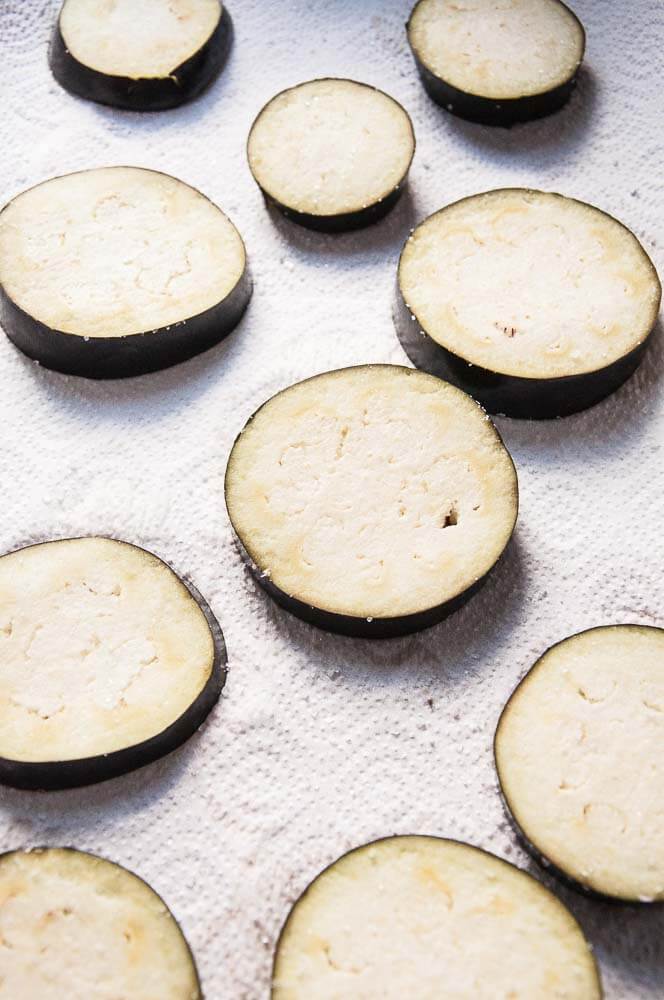 Then, dip them in your chia seed-coconut flour mixture and fry them :)

You could just add some ketchup to your burger now but that’s just boring. What do we need?

This vegan mayo is the bomb! I feel like I’m in middle school again for saying that but oh well. I’ve made a couple of vegan mayos before but I felt they almost always tasted cashew-y. It took me awhile to find the right cashew-macadamia ratio for this vegan mayo. Once I found it though, there was no going back to a plain cashew-based mayo.

I loved slathering it onto my eggplant burger but it’s also perfect for every imaginable type of sandwich. If you add a bit of hot sauce to it, it’s sooo good! 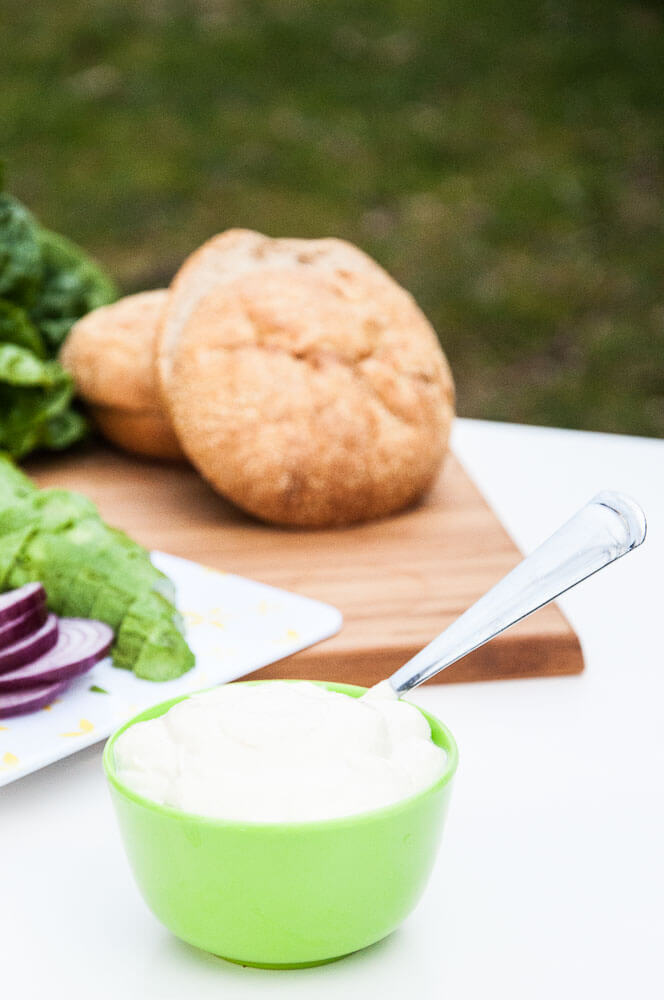 And another must is the smashed avocado. Avocado seriously makes EVERYTHING taste better. 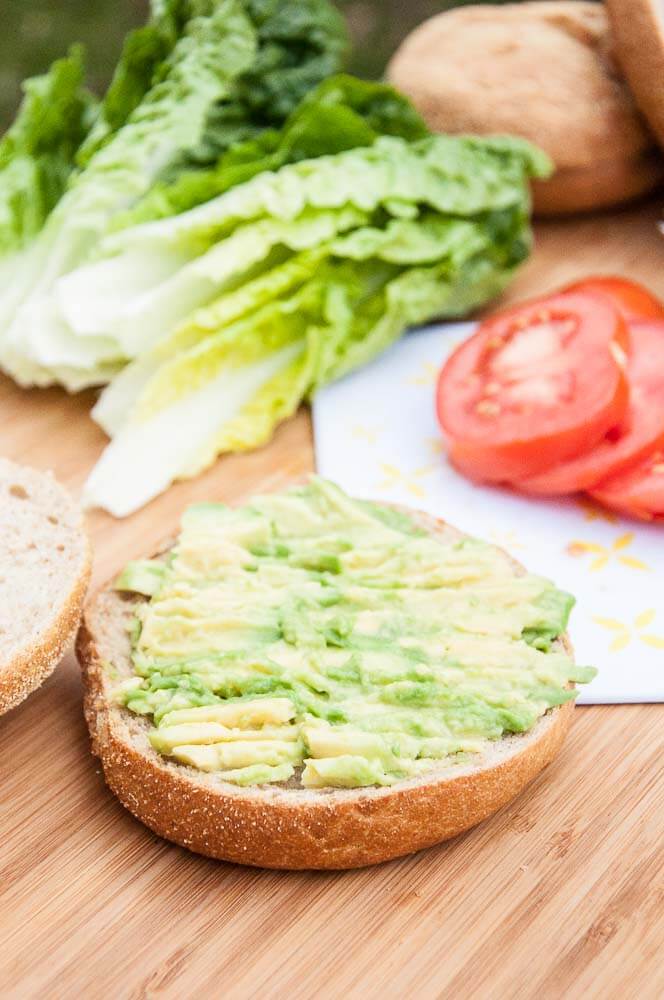 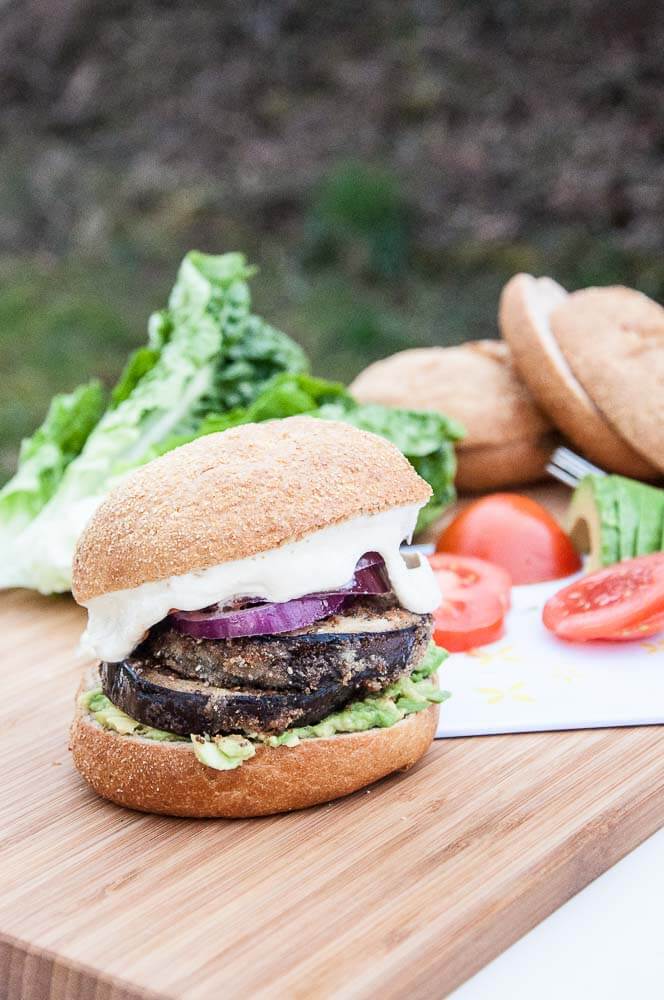 Oops…forgot to add the lettuce :D 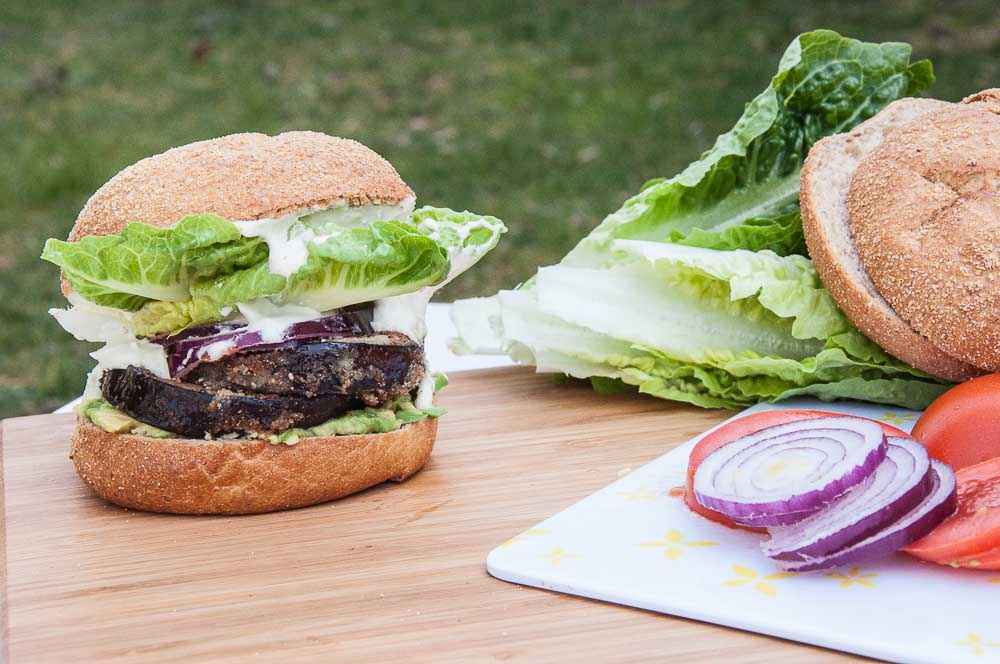 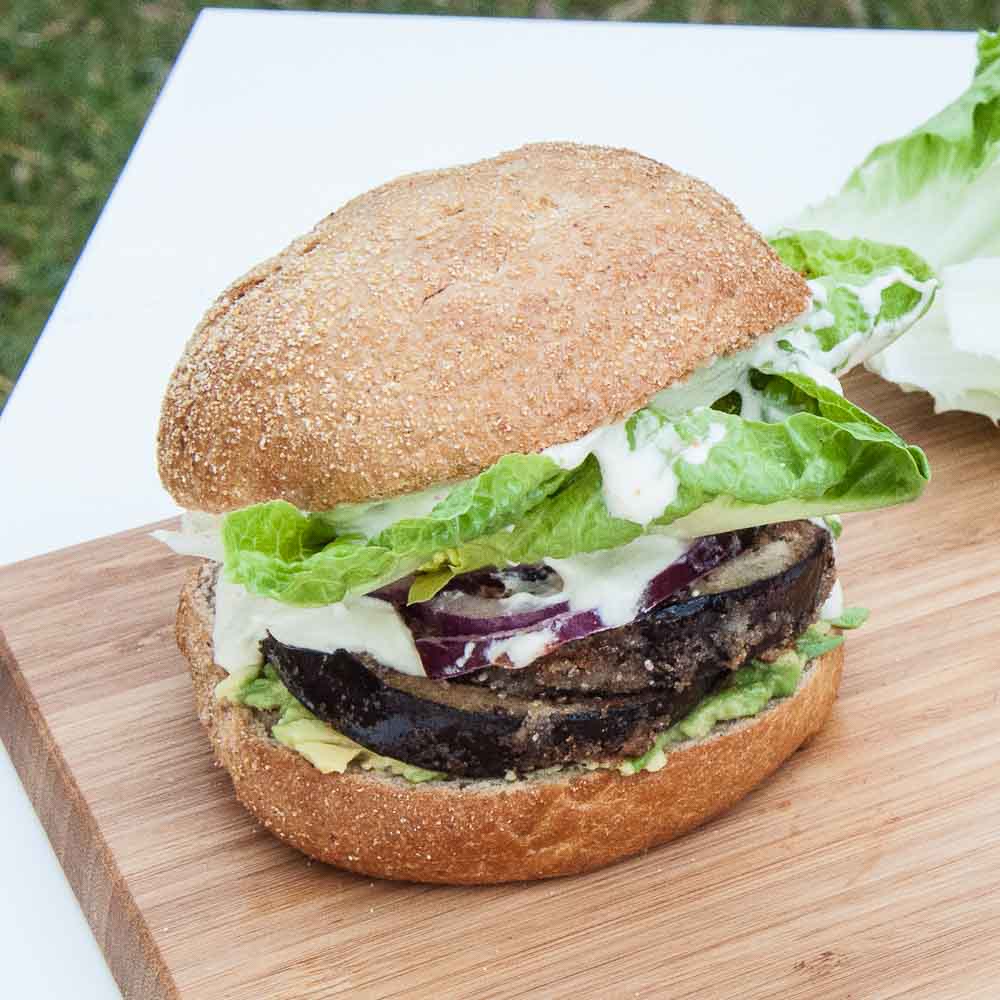 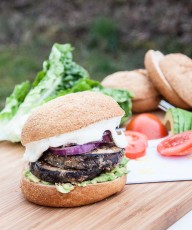 1) The nuts don't have to be soaked for the vegan mayo if you have a high powered food processor or blender. If you're unsure then it's best to soak them from 15 minutes up to 8 hrs. The longer you let them soak the smoother the vegan mayo will be.2) If you don't have any macadamias on hand, then you can also just use cashews. I wouldn't replace them with any other kind of nut though.3) You don't need to coat your eggplant slices. For a low cal version, grill the eggplant slices. 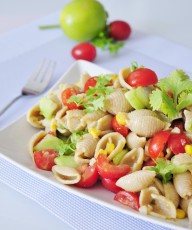 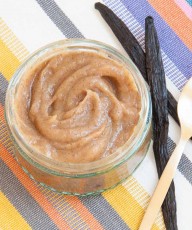 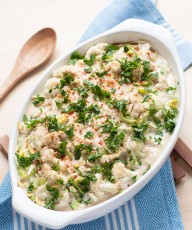 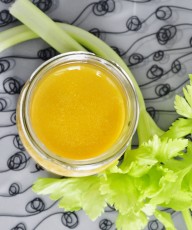 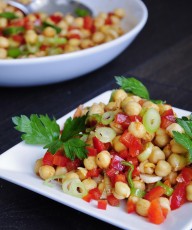 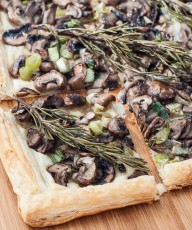