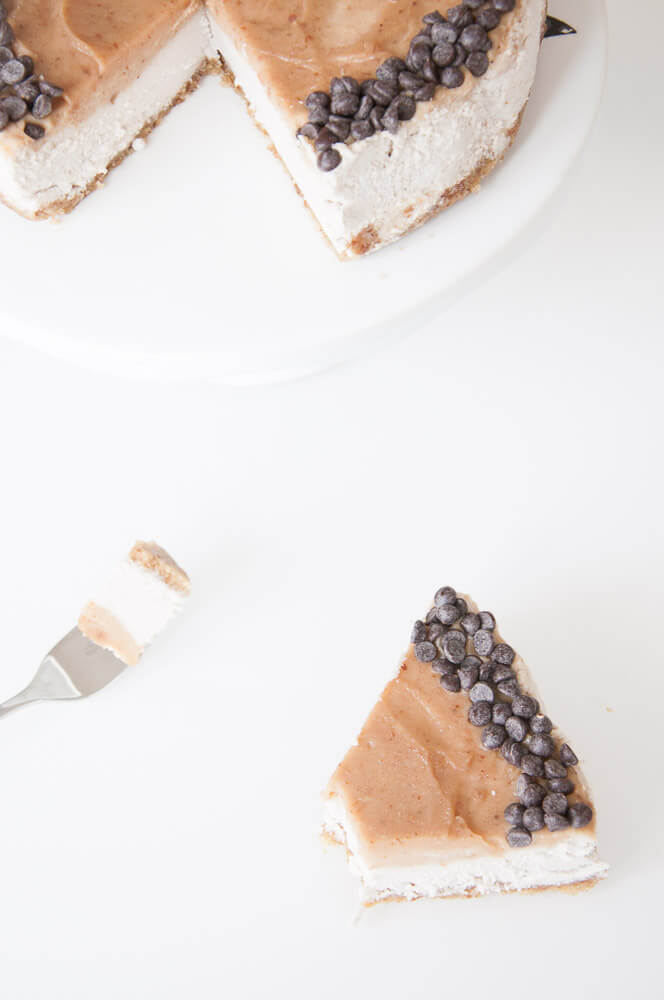 I've been putting my caramel dip to good use. I can't resist. It's that good. That being said, this vegan caramel cheesecake will be the last (for a month or two) caramel recipe I give to you. Reason being, I've done quite a few desserts lately and it's time to share some more healthy ones.

Right now though, we are going to indulge in this incredible caramel cheesecake instead. This recipe is really easy to make. I feel like I say that for nearly all my recipes but it really is true. If you aren't familiar with my vegan cheesecake process then I'll run you through it quickly. 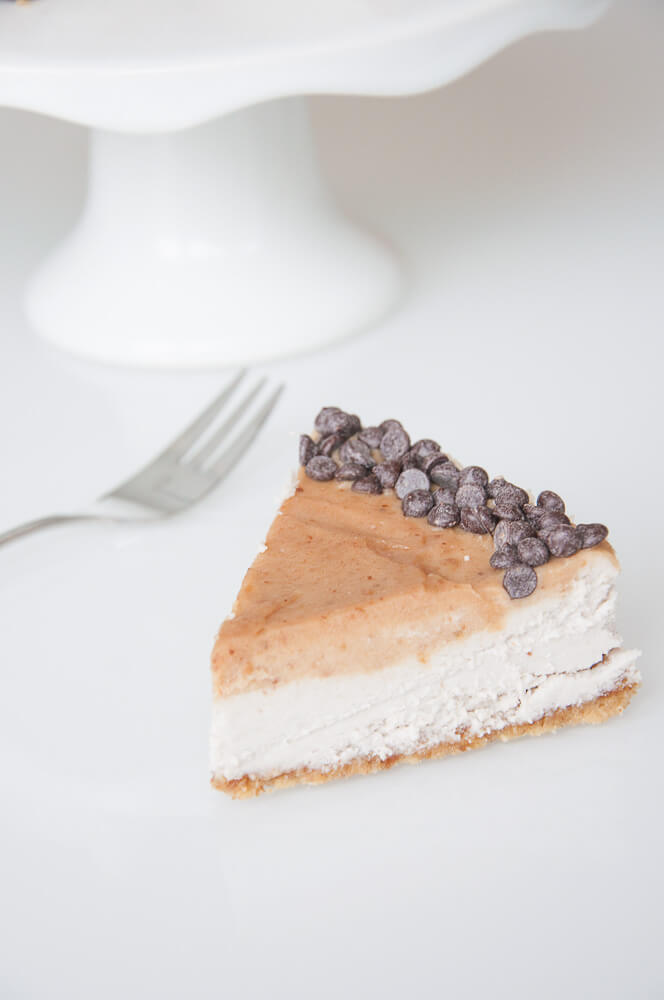 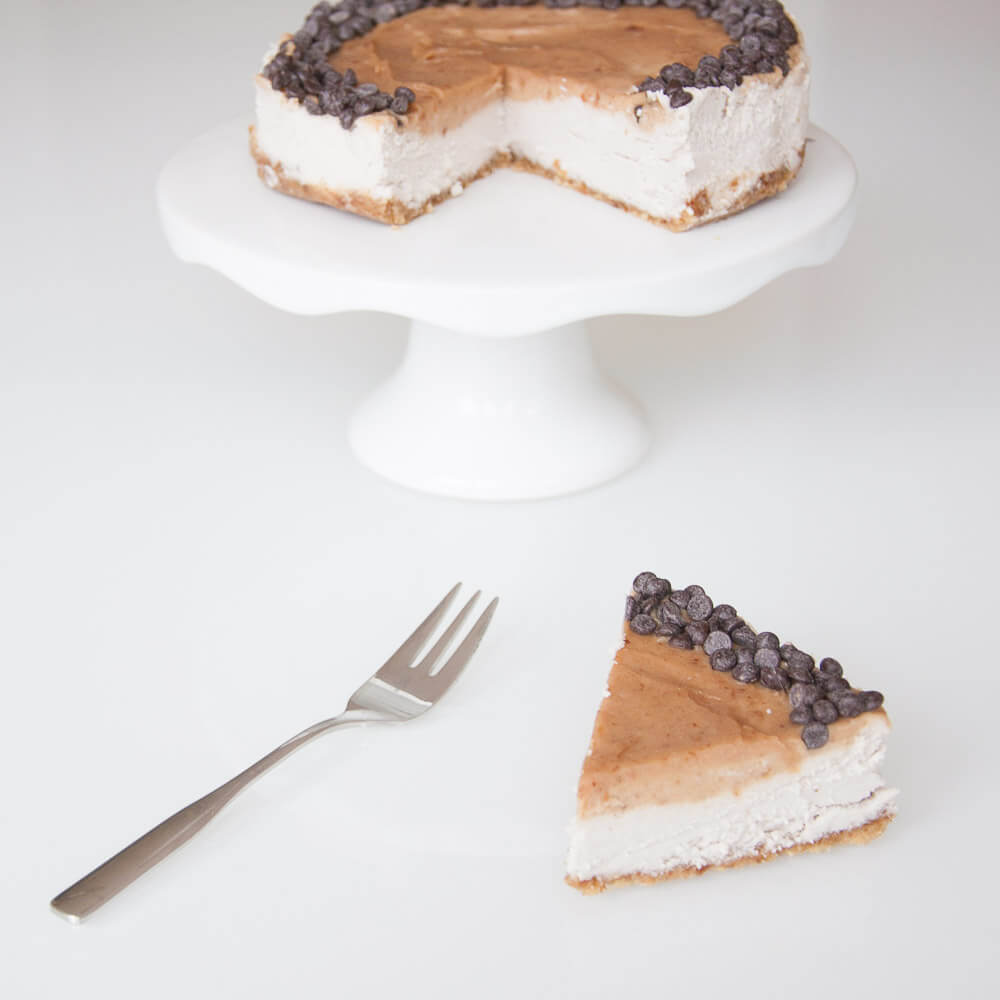 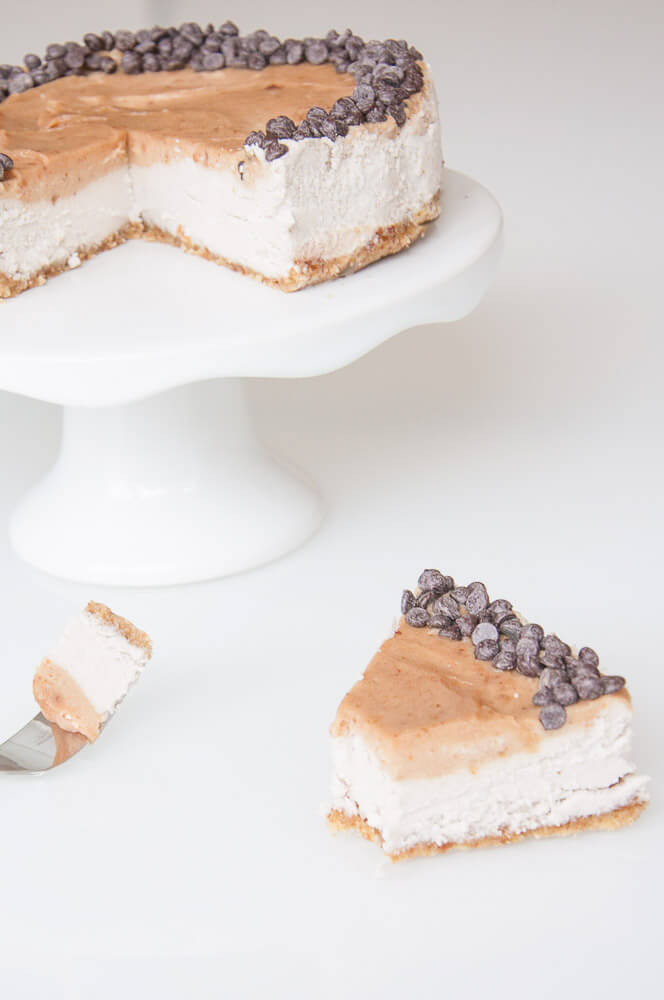 Making the crust is really easy, so easy in fact that I didn't even bother taking pictures this time around. If you want to see the step-by-step then check out the way I did it with my Blueberry Lime Cheesecake recipe.

The filling is very similar as well but this time we just use three ingredients. Coconut cream, VFR's Caramel Dip/Sauce, and Cashews. Process all the ingredients in your food processor until they are nice and smooth. 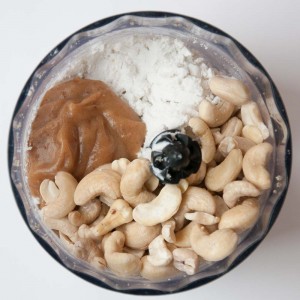 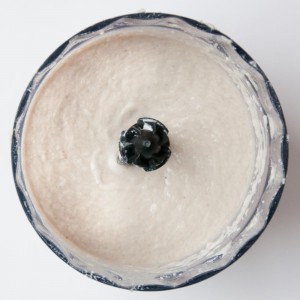 Got that done? Perfect. then just spread it over your crust. 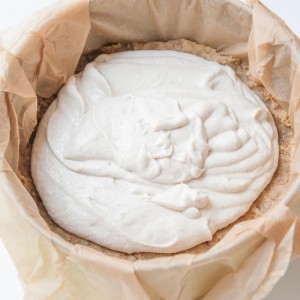 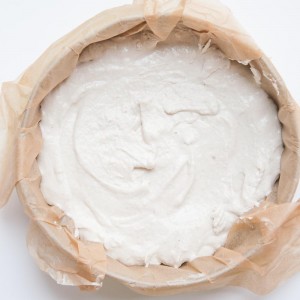 Now pop it in the freezer. This is very important. If you don't let the caramel filling set a bit you won't be able to easily spread the caramel topping over it. I made that mistake the first time I made this cheesecake. My caramel dip ended up just getting smeared into the cake instead of having a nice layer on top. 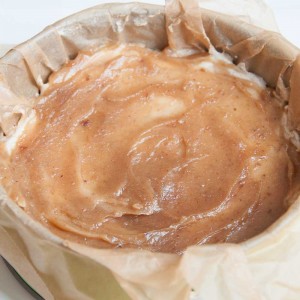 All that is left to do now is wait until the caramel cheesecake is set. Then remove it carefully from the springform, admire it for a few seconds (tops!), and dig in! 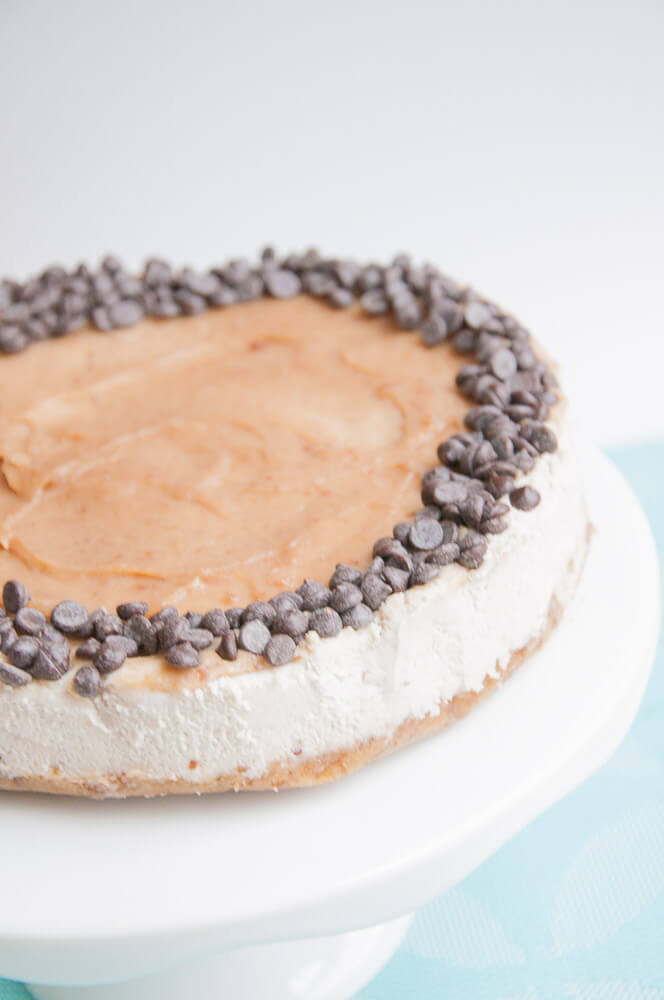 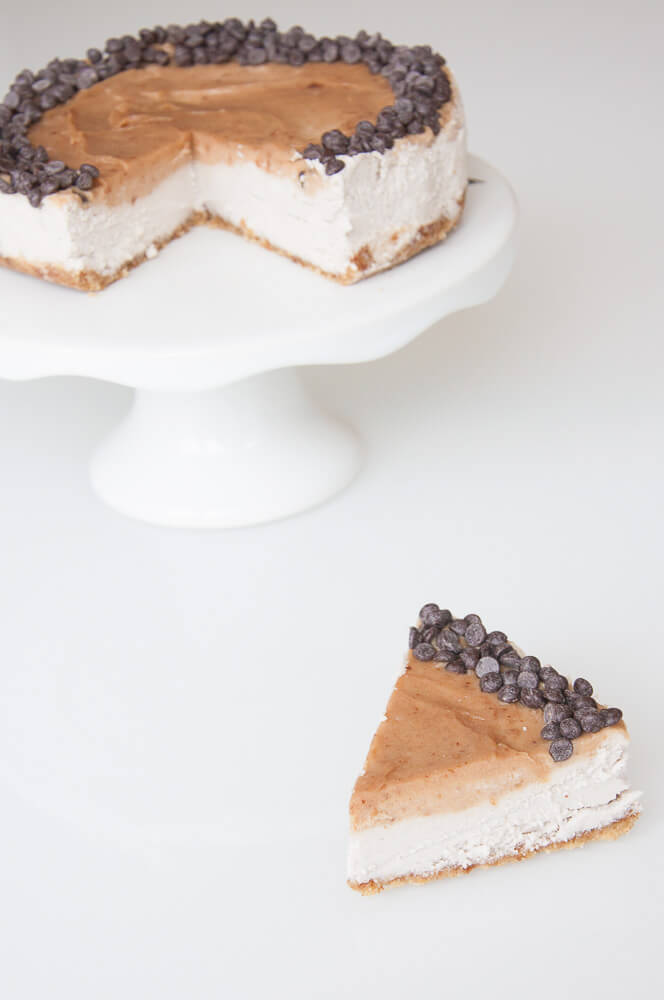 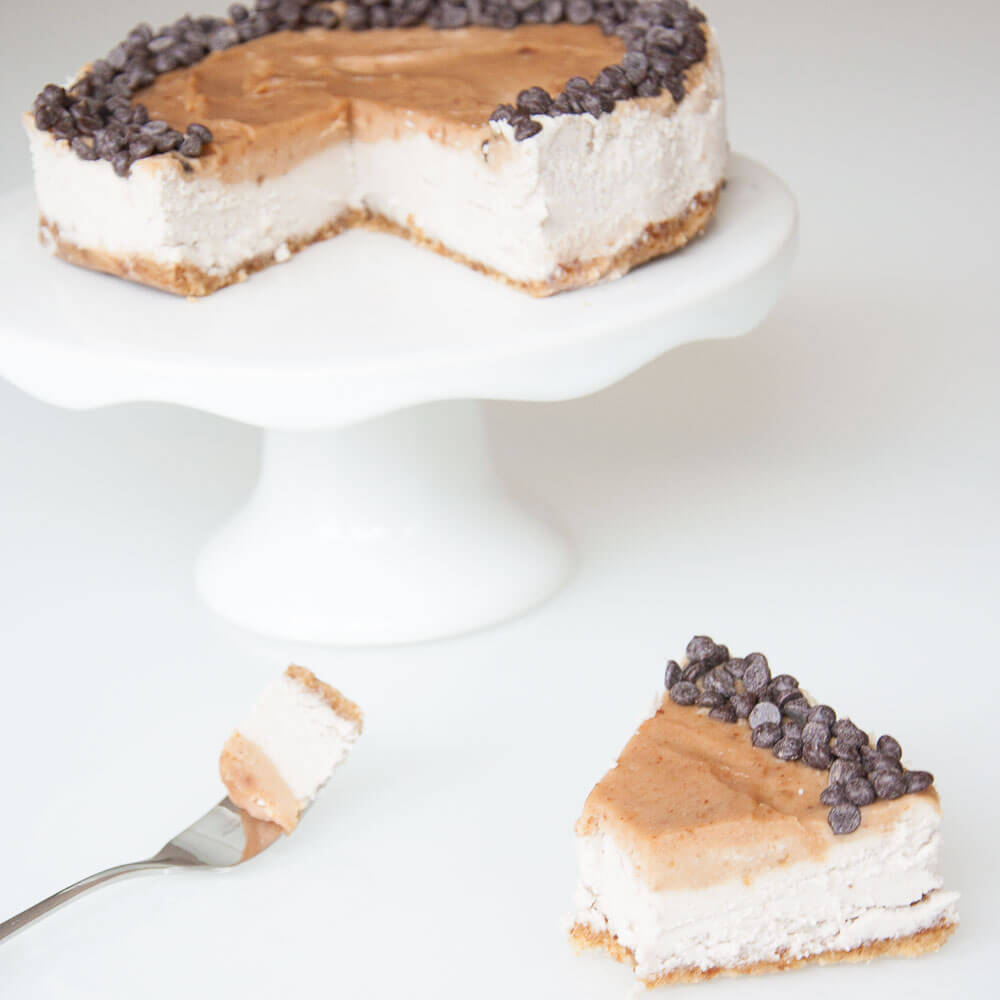 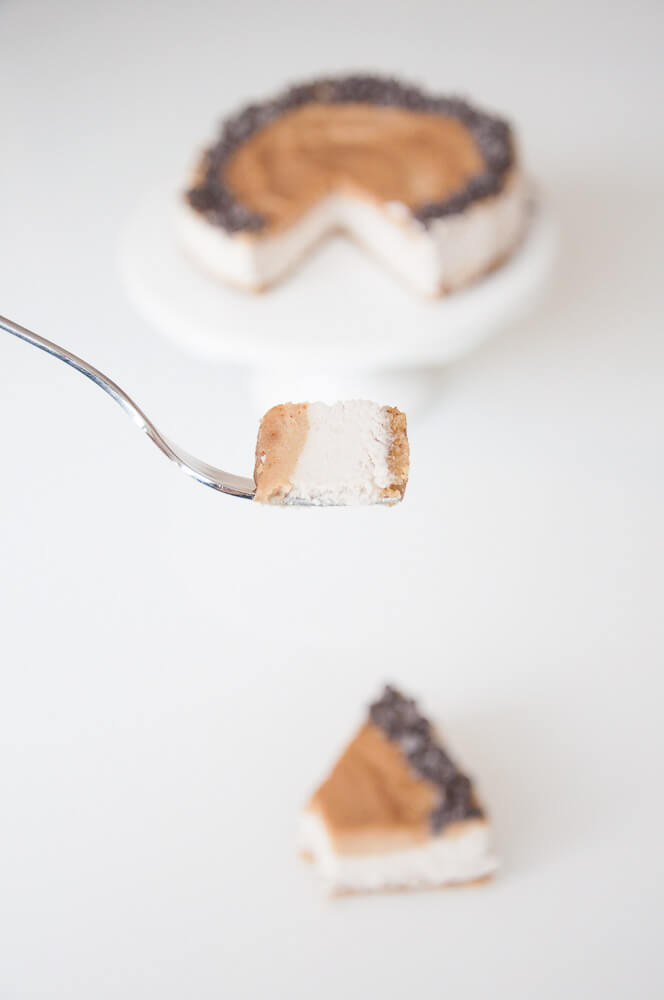 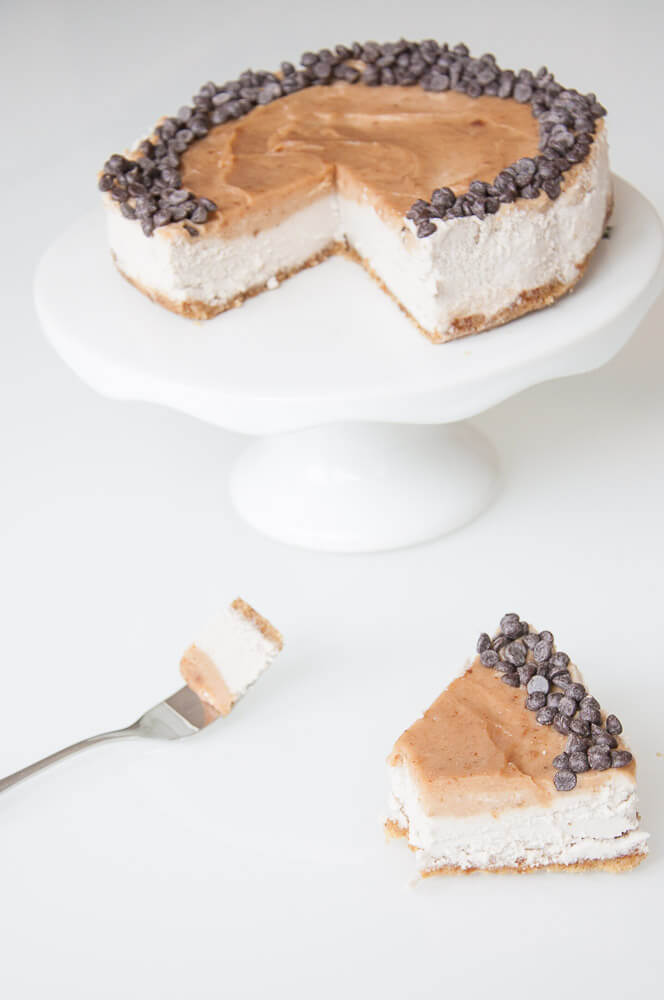 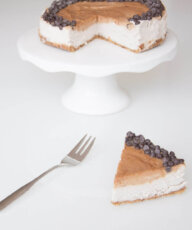 This No Bake Vegan Caramel Cheesecake is incredibly easy to make. Oil-free, no added sugar, and deliciously creamy. One of the Vegan Family Recipes's best desserts.

1) The caramel dip will spread better once heated. Heat slowly in a warm water bath or in the microwave. 2) It is very important that you allow the filling to get hard in the freezer first. If you skip this step, the caramel dip won't spread over the top easily and just smear into the filling instead. 3) The walnuts in the crust can easily be substituted with any other nut (except cashews). I like making the crust with almonds, macadamias, and peanuts as well. Sunflower seeds will also work. 4) 2 cups of coconut cream can be obtained from 2 cans of coconut milk by setting the cans in the back of a fridge and leaving them there overnight. Carefully remove cans from the fridge and open the cans, The coconut cream should have separated from the water at that point. Remove the hard white mass (coconut cream) and use the water for something else i.e. smoothies. Coconut cream can also be bought at the store as well.5.) To make it extra easy to remove the cheesecake from the springform, place the caramel cheesecake in the freezer for about 15 minutes before trying to remove it. 6.) This cheesecake is freezer-friendly. Allow enough time for it to thaw.