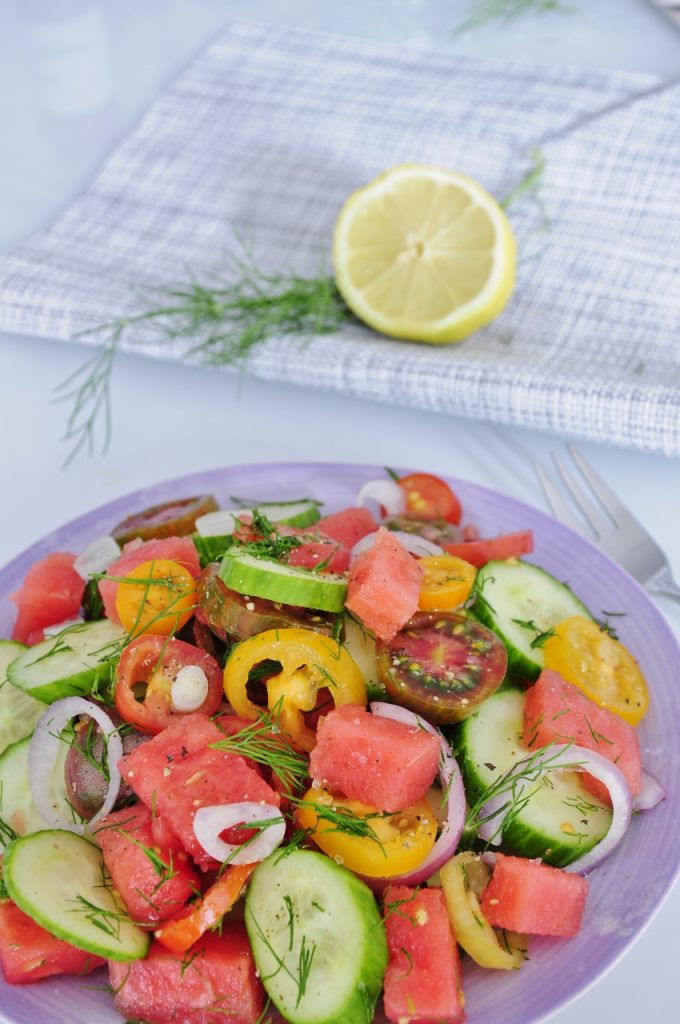 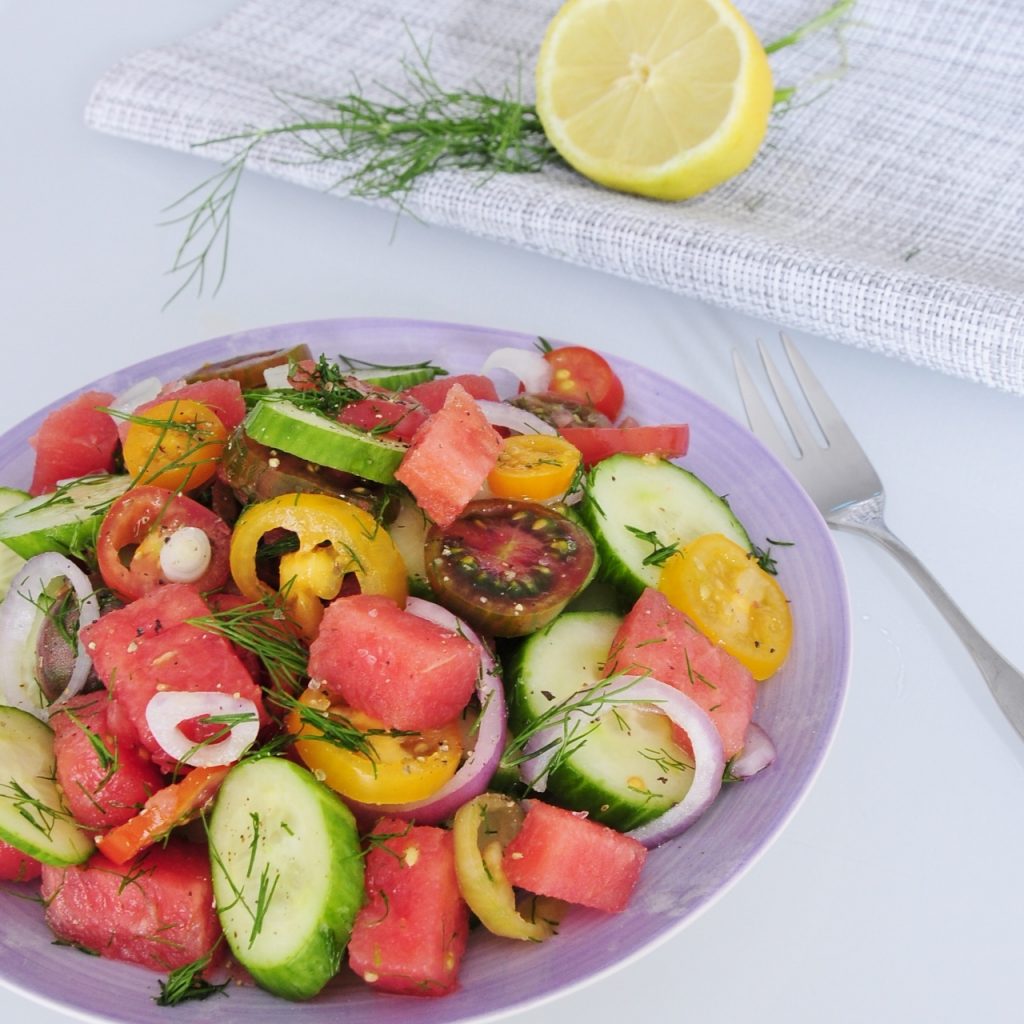 Summer is almost coming to an end which means we need to make the most of all the delicious summer produce to be found. If you’ve been to your local farmer’s market (or even Trader Joe’s) this summer, you will have noticed the vast array of different colored tomatoes. These are called heirloom tomatoes which can vary in color from green to red to yellow to dark purple. Some people claim that heirloom tomatoes don’t taste any better than your regular roma, cherry or beefsteak but I beg to differ. I find each different type of heirloom tomato has its own unique taste which make them perfect for a raw tomato salad.

I picked up some mini heirloom tomatoes and used them for this salad. To really showcase their individual flavor I wanted to keep this recipe as simple as possible. I didn’t want to add to many different flavor but I had an entire watermelon and some fresh dill laying around that needed to be used. So what did I do? Obviously added it.  Surprisingly, it turned out perfectly and the flavor of the salad couldn’t have been better. 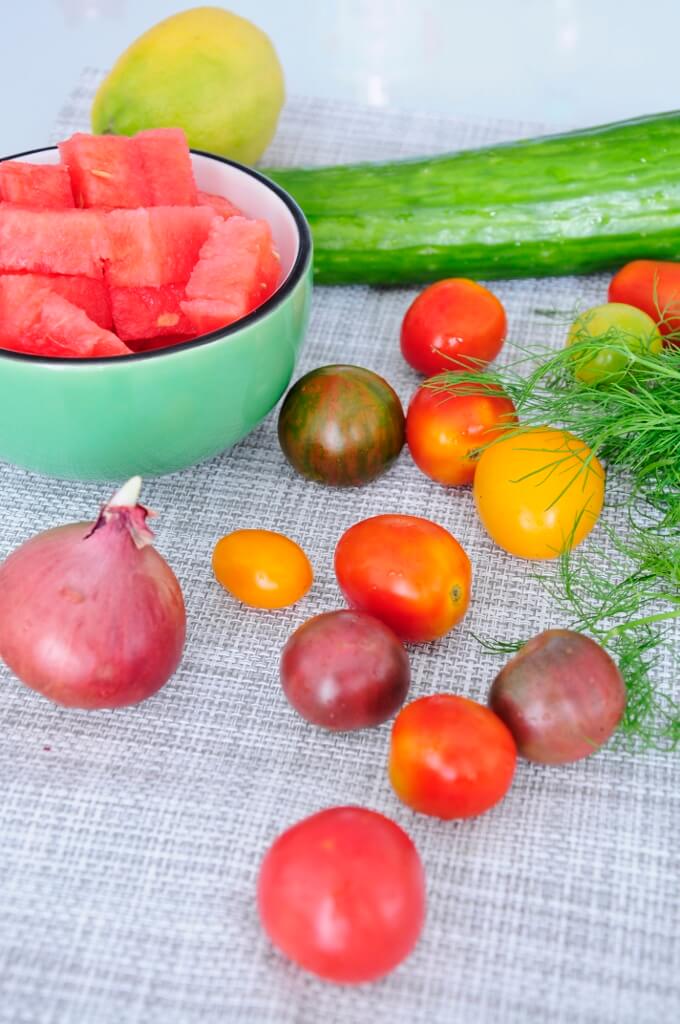 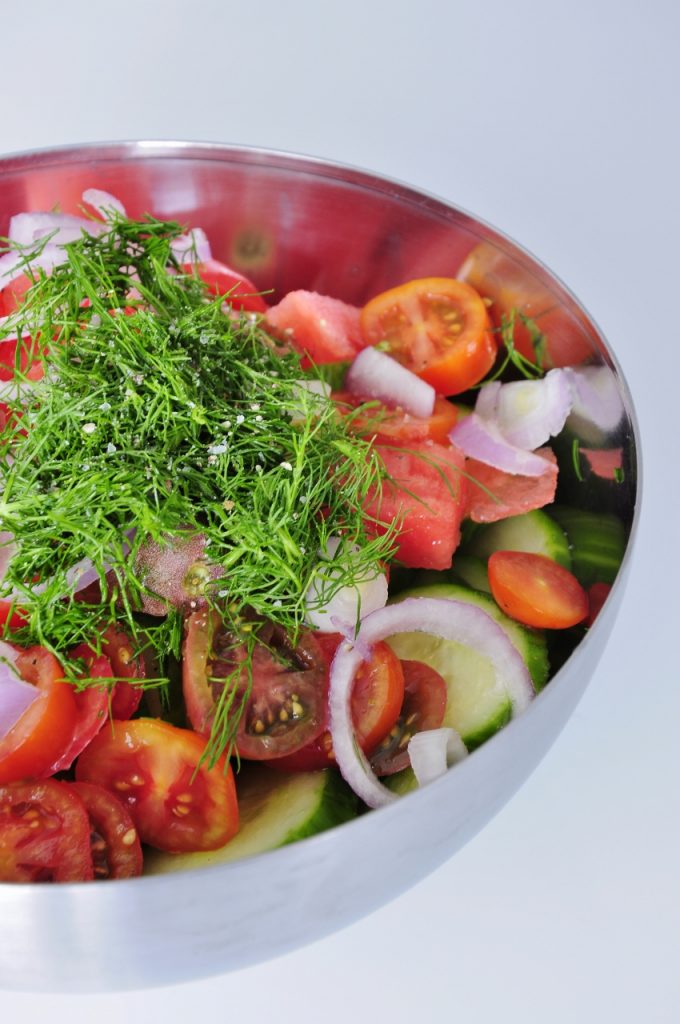 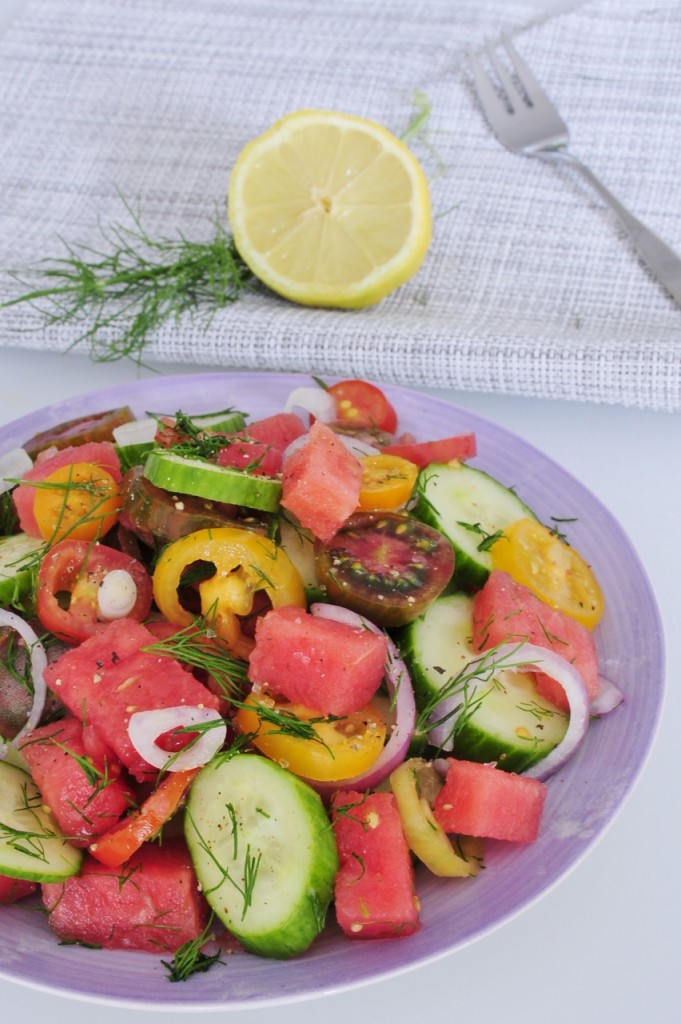 I drizzled the heirloom tomato salad with lemon juice for added acidity and that was it. So yay! This recipe is even an oil-free salad! Now some may complain about the fact that you need oil for proper nutrient absorption and I agree. However, most of us will also be eating this salad with something else that will most likely be containing some form of oil. So why double down on the oil? There really is no need to drown these beautiful tomatoes in a dressing. Let them speak for themselves. That being said, if you really do want to add a bit of olive oil, go for it. It won’t ruin the flavor :D 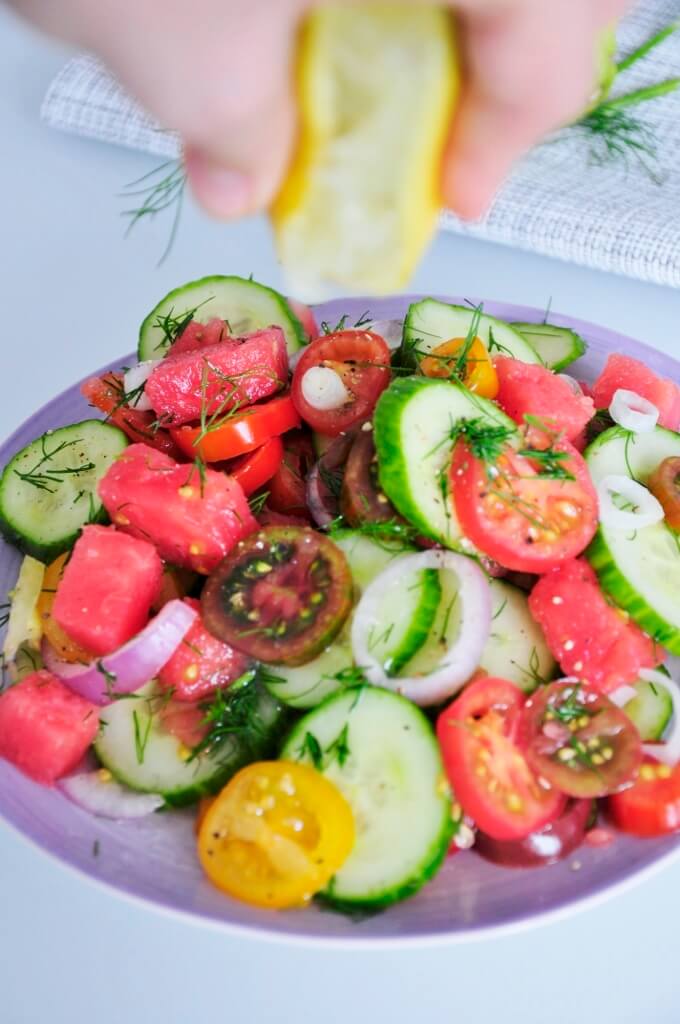 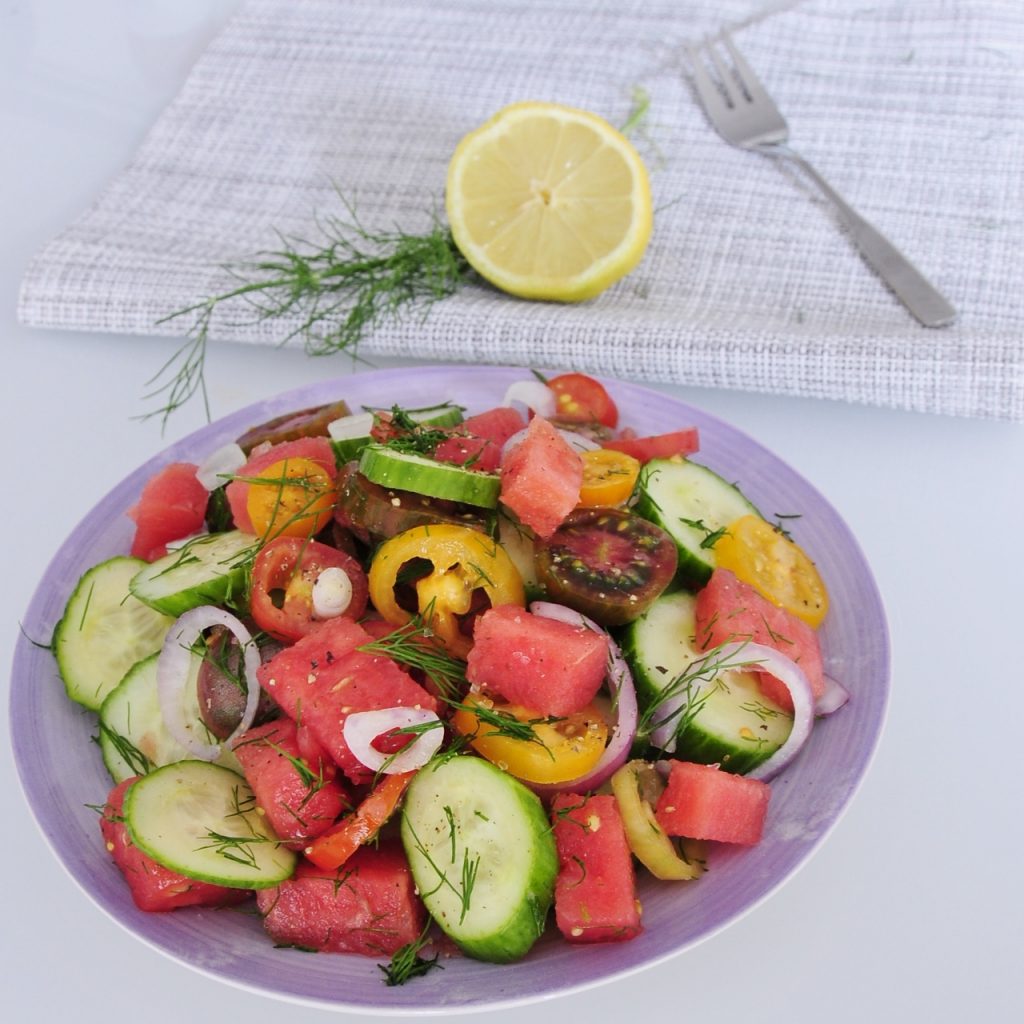 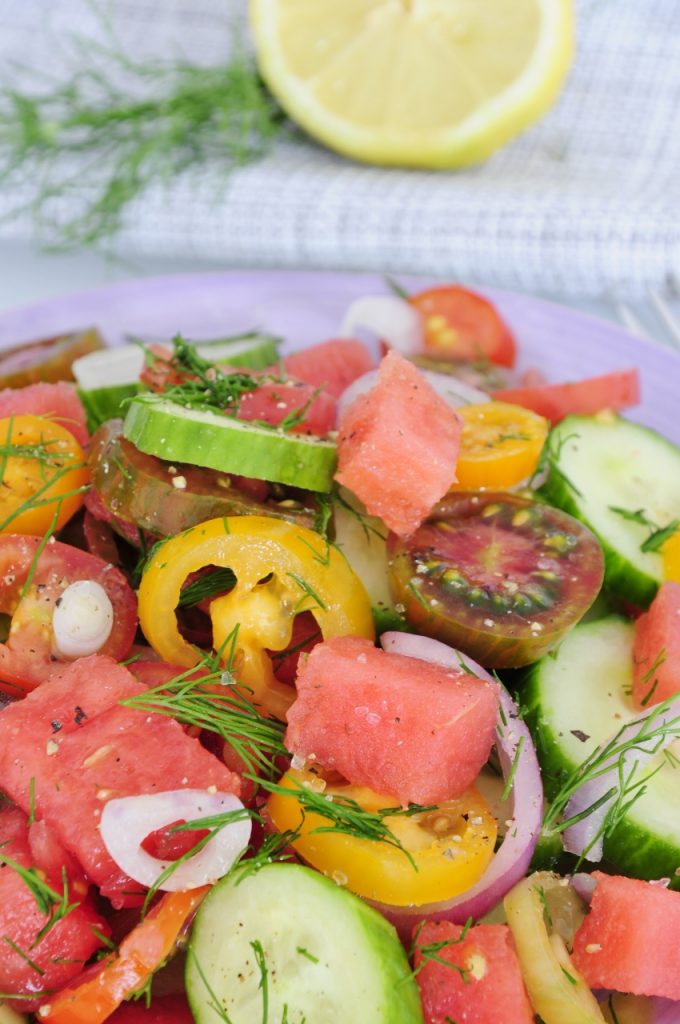 I didn’t label this as kid-friendly and I’m sure most of you wouldn’t have. My 13 month old didn’t want to have any part of this salad. the fact that lemon juice was on his watermelon didn’t go over well. Everything I placed on his high chair tray ended on the floor. However, my 3 year old went crazy for this salad (minus the onions). I think most kids that age like little tomatoes and the fact that they were all different colors made him so excited. He was jumping up and down because he wanted to “eat all the rainbow tomatoes”. He was so focused on eating the tomatoes that he didn’t even realize there was watermelon in the salad as well. When he did though, he just looked up at me with his big dark eyes and we had this beautiful “3yr old why conversation” :

“Mama, why you put watermelon in my salad?”

“I don’t know. Because watermelon is sweet. There is a bit of salt on there so that makes it salty.”

I’ll stop myself there. I’m sure anyone that has had a 3yr old knows that that conversation didn’t end there and kept going for a LOOONGG time. He did finish his salad and that I think is the most important part! 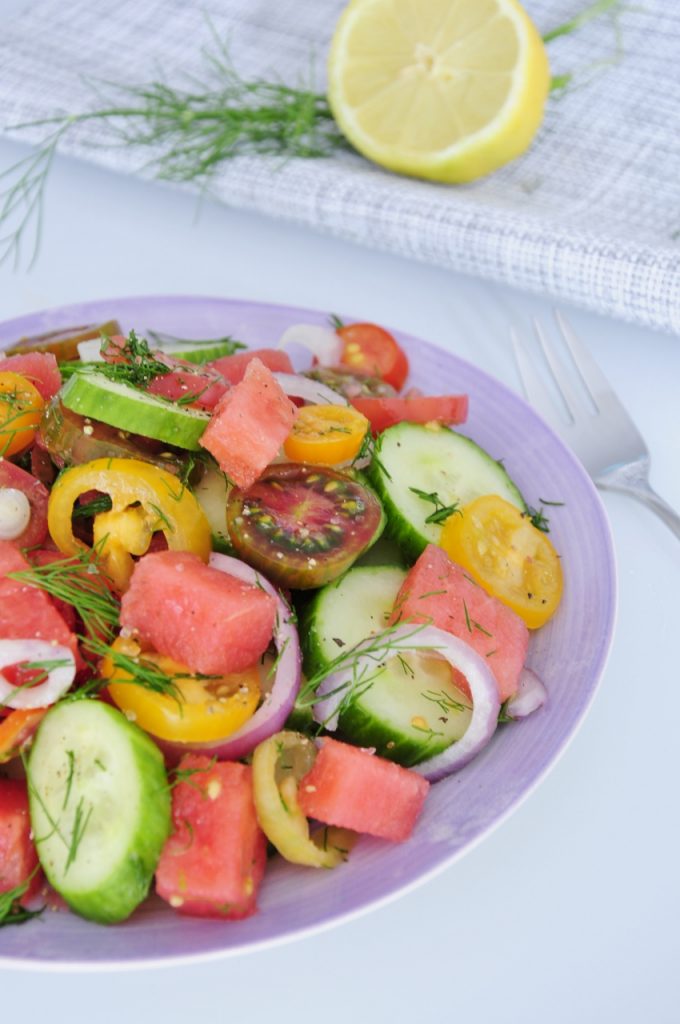 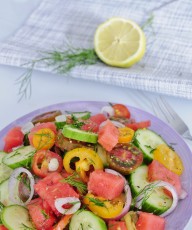 1) Salad can also be made using regular tomatoes.2) You may add olive oil to salad, if desired. Olive oil helps with nutrient absorption of the vegetables but if serving this salad as a side where you are getting oil elsewhere then adding it is not necessary. 3) If you wish to remove cucumber skin, you may do so. 4) Heirloom Tomato salad is best served fresh but will keep covered in refrigerator for up to 3 days.

Looking for a different type of tomato salad? Try this Vegan Caprese Salad! 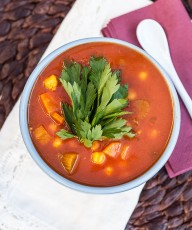 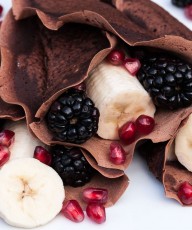 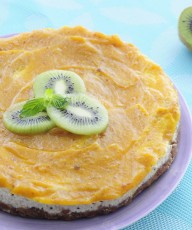 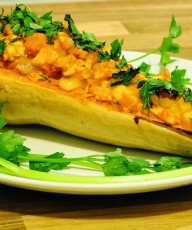 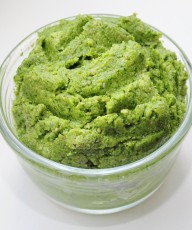 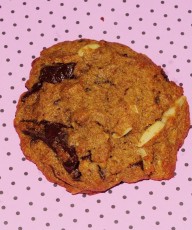