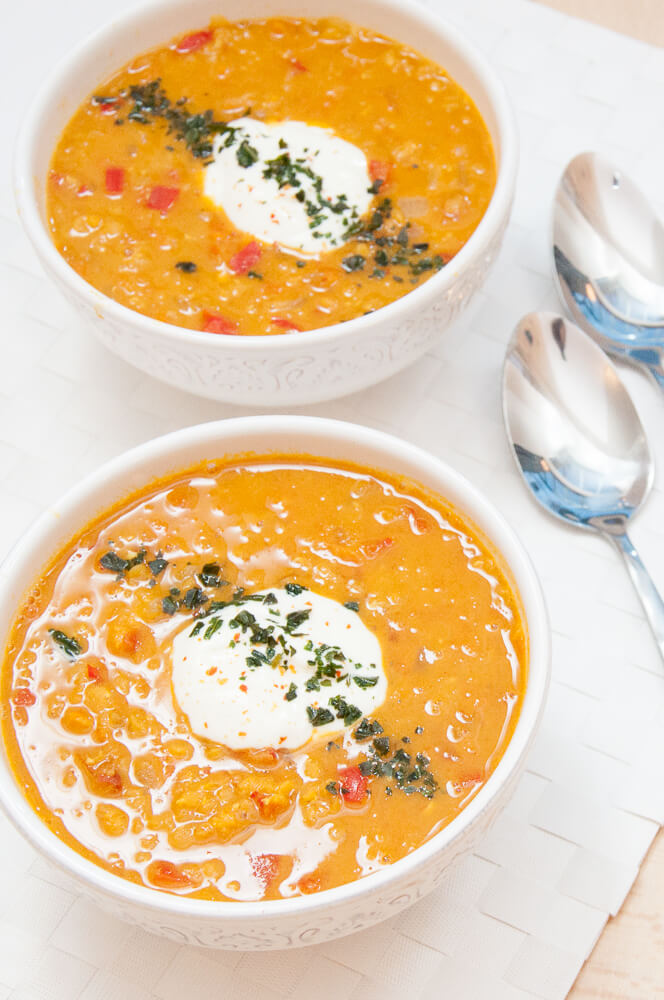 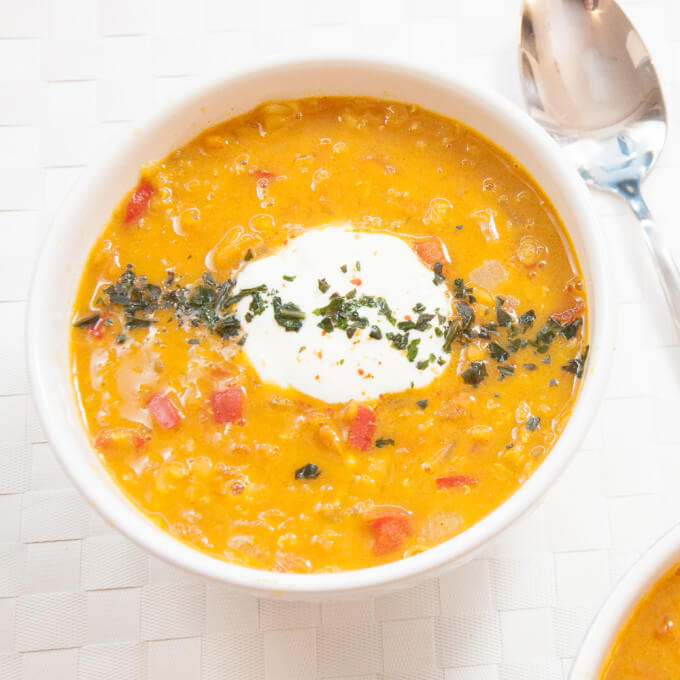 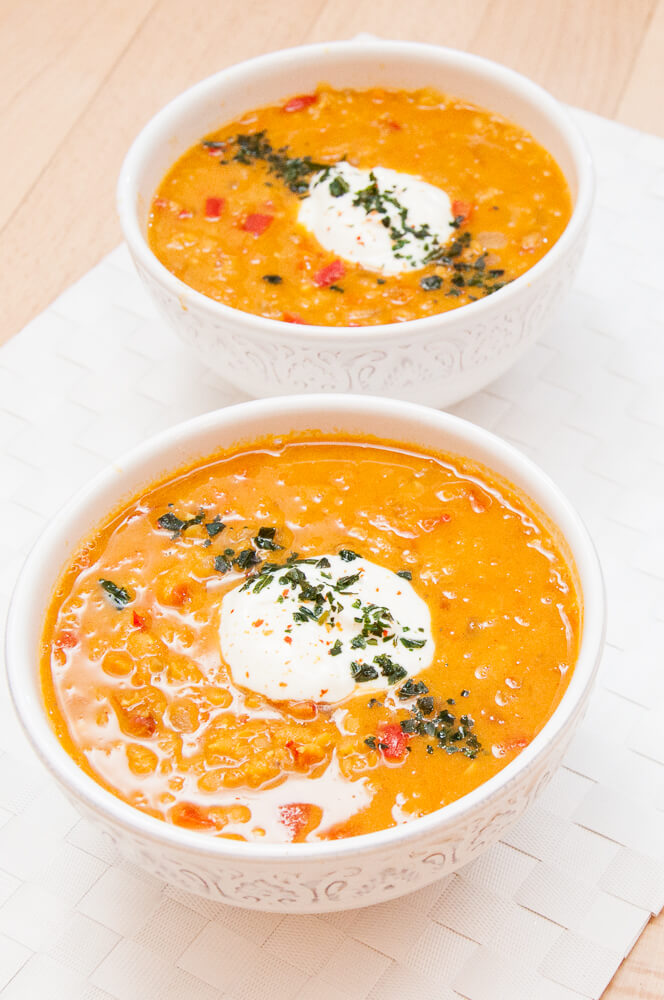 I kind of have a thing for lentils. They're super rich in fiber, protein, and iron aka perfect for anyone following a plant-based diet or just want to stay healthy. Often times lentils or legumes have a bad reputation. Mainly in part because people can get really gassy from them...happens to the best of us :D I think the people that are affected by them in that way just don't have a fiber-rich diet, to begin with. For most people following a vegan diet though, you are used to eating a lot of fiber, thanks to all the fruits, veggies, and enormous amounts of hummus you eat a day! So having lentils should only affect you in a positive way!

Check out those little red pellets of health. So good! Oh, excuse my super wrinkly
hands. I went hand washing OCD while making this soup so afterwards my hands looked...well...OLD! 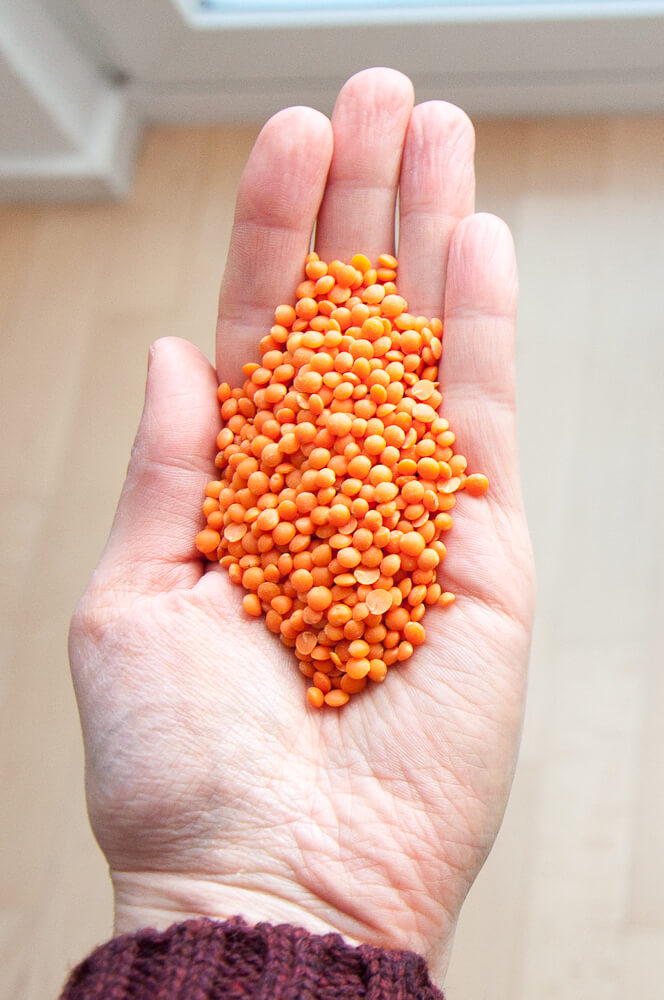 Enough talk about gas, fiber, and old hands though. Let's get to what we are really here for. I was sick of boring red lentil soups. So I decided to make a red lentil carrot soup with a spicy red curry kick. 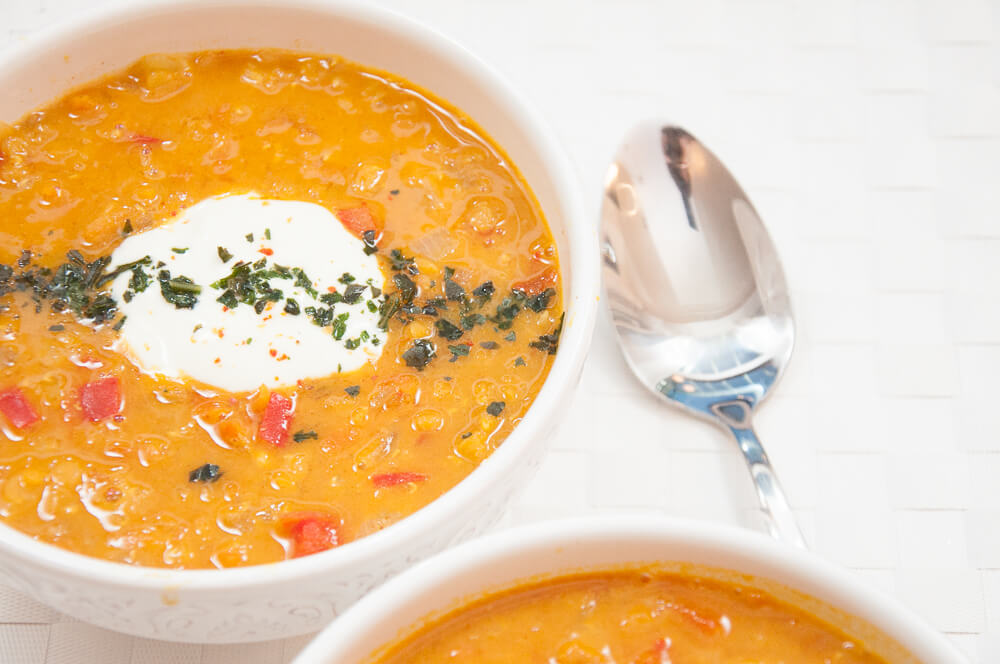 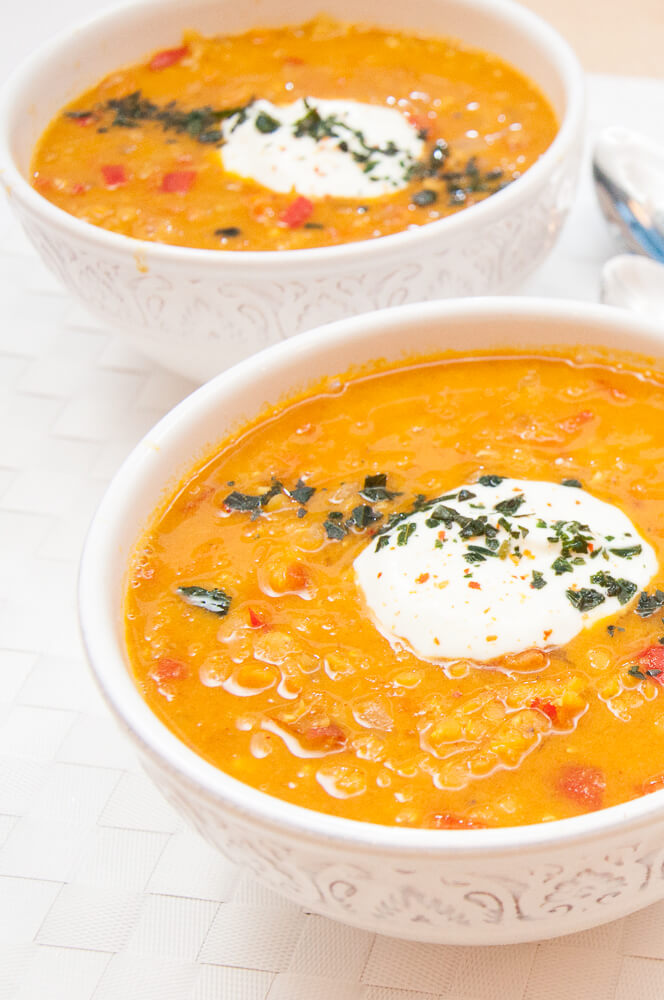 It has some Thai inspiration, though I'm 99% sure this is not an authentic Thai soup :) That's OK though, we can pretend we're in Thailand on the beach sipping this hot red lentil soup...yeah, I don't want soup on a beach. I'll take anything fruity with a lot of alcohol instead!

Let's be real. It's freezing outside, so this warming red lentil carrot soup will have to do. 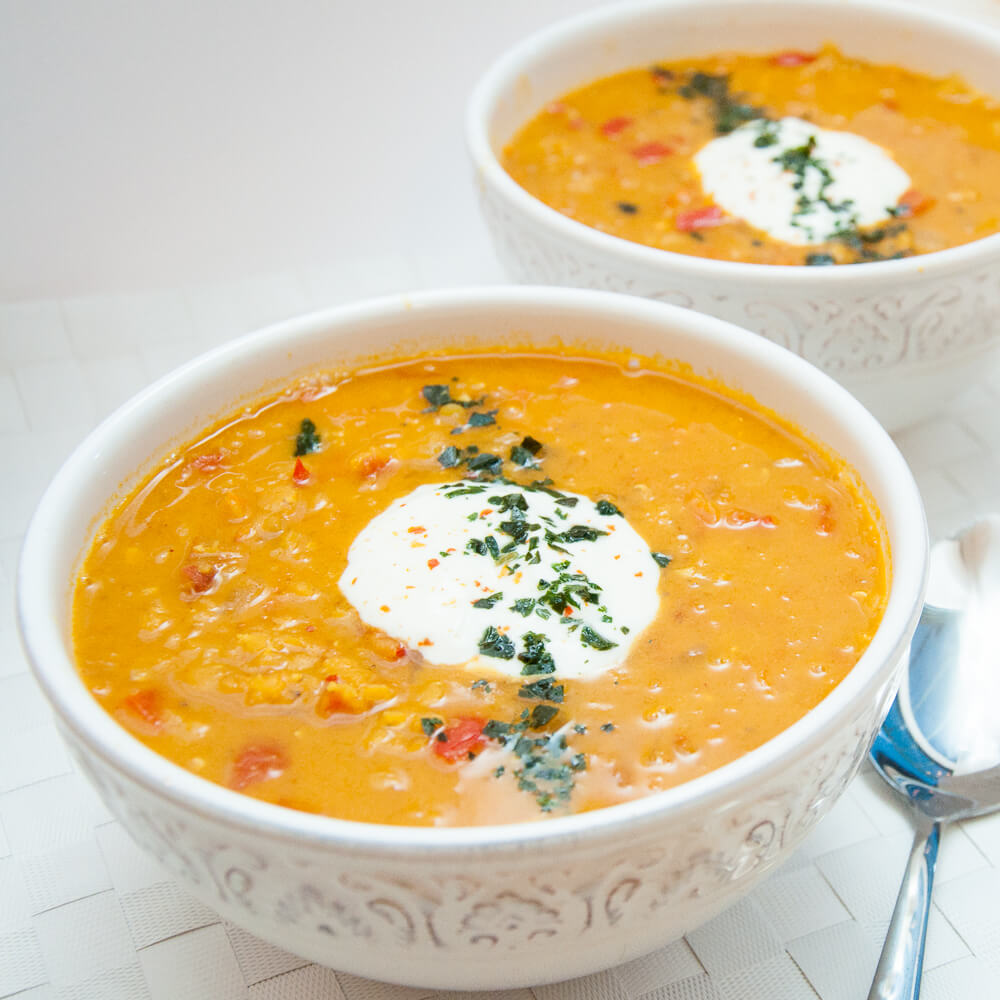 This soup has some of my favorite flavors in it. Fresh ginger, lime juice, and garlic, and top it off with coconut milk. Yum! Because I used red curry paste in this red lentil soup, lets us not have to use any broth. Red curry paste is pretty salty, to begin with and can get a bit spicy so goes easy with it if you can't handle the heat :D Thankfully there are low-sodium red curry pastes out there so that we won't all be bloated the next day.

Surprisingly, this red lentil carrot soup is also pretty easy to make. Maybe not be as easy as making your own coconut butter but as far as soups go..it's pretty simple. I left this soup nice and chunky which kept me full nearly the whole day or it might have been because I ate 3 bowls of this within 20 minutes. If you're more into creamy soups though, then you can easily use an immersion blender to puree all the ingredients once they are cooked. 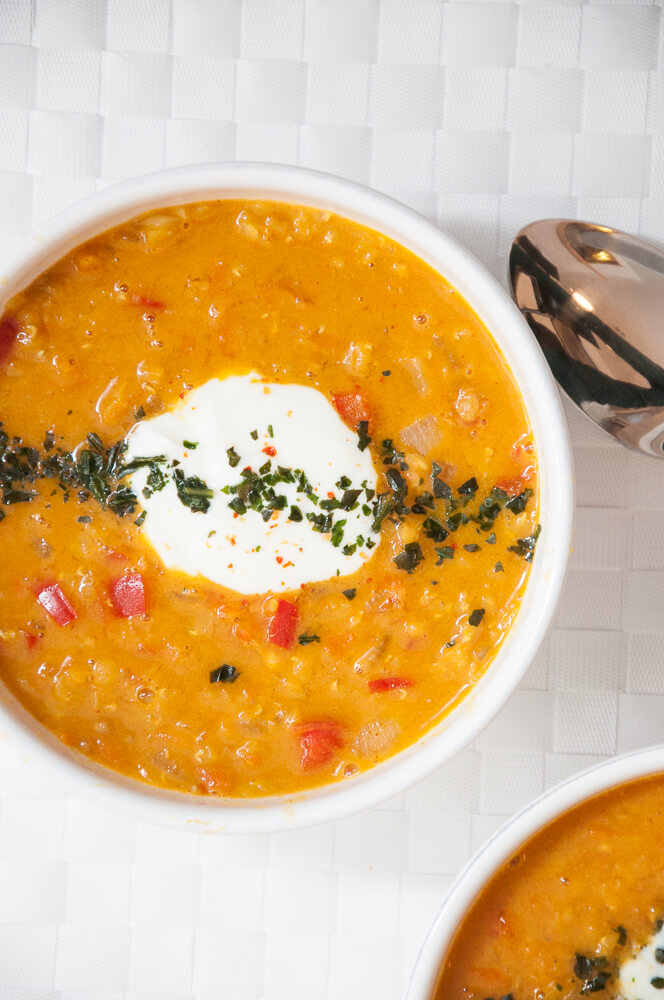 Also, don't forget the toppings! No soup is complete without toppings or garnishes or whatever you want to call it. I topped mine with a bit of coconut cream, red pepper flakes, and chopped basil. Be creative though. Add whatever your heart desires...even if it's chocolate chips. OK, that's a little bit weird...but hey, there are some weird people out there, right?

Alright, forget the chocolate...just DIG IN! 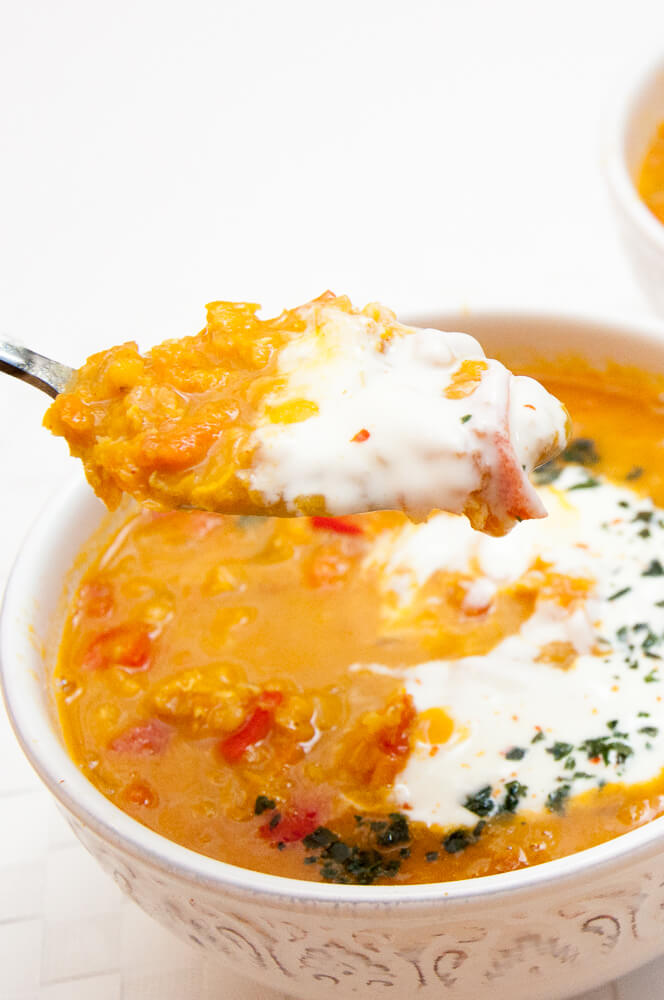 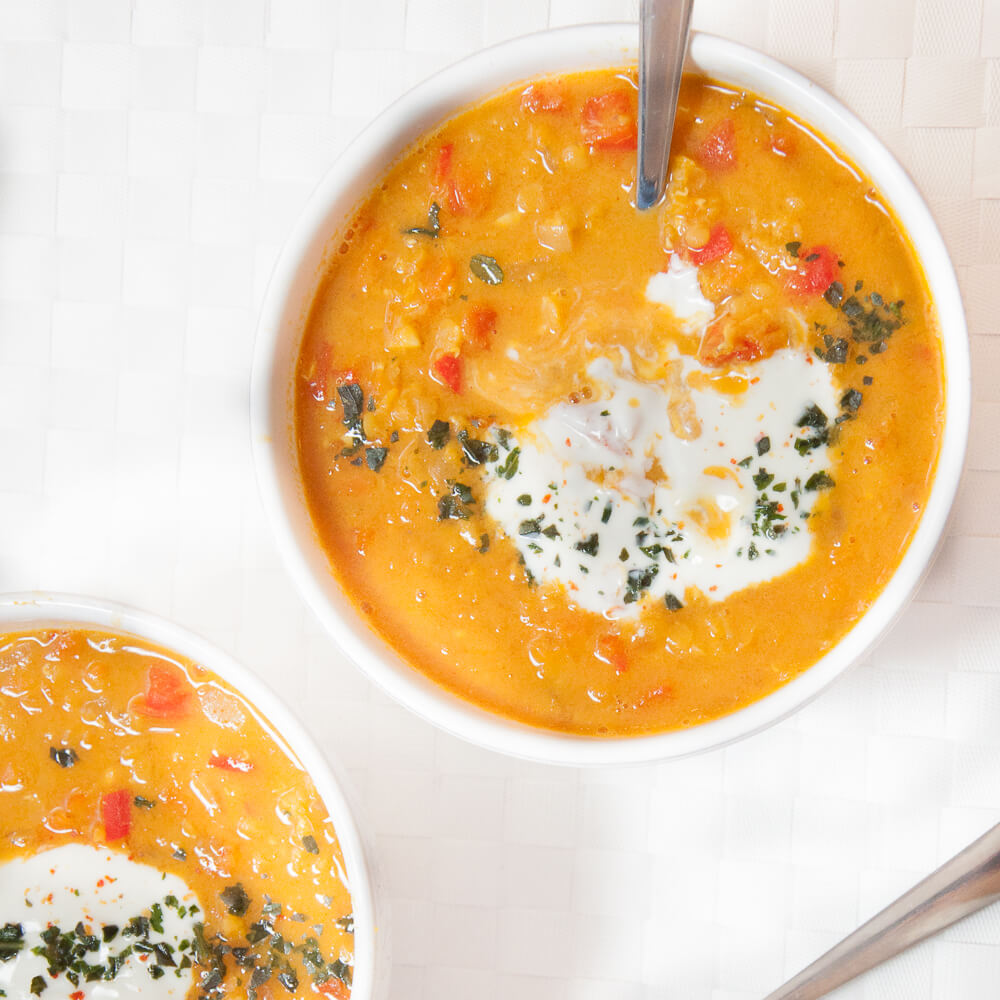 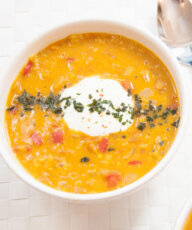 Feel a little lost with these ingredients? Let me help :D

Red Curry Paste - low-sodium, vegan & gluten-free! -> Note that not all curry pastes are vegan. In fact, most aren't. Most of them contain fish sauce or shrimp paste so make sure to always red the label!

You can also check out my vegan soup cookbook!